Author’s Note: The Science of The Final Six

Author’s Note: The Science of The Final Six 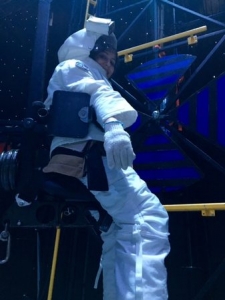 Writing The Final Six was one of the most fulfilling experiences I’ve had drafting a novel, since it allowed me to explore a longtime fascination with space, and involved endless research—my favorite task as an author! During the course of working on the book, I attended space camp for adults (a bucket list item), met with NASA scientists, visited museums and space centers, read and watched everything I could get my hands on—and then filtered all that I learned through the lens of my story, creating a novel that is largely based on real science, but with some deviations for artistic license.

I was so fortunate to have a couple of key experts read the manuscript and weigh in: Dr. Firouz Naderi, the space-industry luminary who oversaw key missions at NASA (and a personal hero of mine!), as well as Dr. Teresa Segura, a brilliant atmospheric scientist and friend. They were both so generous with their time and expertise, and kindly pointed out any of the science that needed correcting. While I made every effort to keep the science in my book as real as possible, there are a few instances where my story diverges from reality. These are choices I made in service of the plot, and I acknowledge and own any factual inaccuracies.

One of the plot points where fact blends with fantasy is the Mars gravity assist en route to Europa. It is feasible for astronauts to travel to Europa by way of Mars, as depicted in the book, but with one notable exception. As Dr. Naderi explained to me, the fuel and energy required to enter Mars orbit would technically negate a possible gravity assist/slingshot effect. The more scientifically correct way to achieve this time-saving maneuver would be for the Final Six to dock with the Mars supply ship, and then return to Earth orbit for a slingshot to Europa. After playing out the two scenarios, I chose to keep the trajectory a straight shot from Mars to Europa for story and pacing purposes. This is an example of artistic license I took with the book—and you will all find out much more about the importance of this plot point when we reach Book Two! 🙂

Another element of the story that leans more on fantasy is the idea of terraforming Europa. Should astronauts touch down on Jupiter’s moon someday in real life, they would likely only be able to live in constructed surface habitats (such as the Bigelow Aerospace living quarters I describe in the book), and any drilling through the ice would be for experimental purposes rather than terraforming. From a story standpoint, however, I love the possibilities that terraforming provides—and once again, much more to come on this in the sequel!

When it came to the climate-change aspects of the story, I did a lot of studying up on what our world will look like as sea levels continue to rise. As with the space travel elements of the book, I made every effort to keep the environmental details as authentic as possible, but again took artistic license in a couple of spots. The main place where you’ll find a deviation from fact is the earthquake and subsequent tsunami that is felt all the way from Texas to California. While the same earthquake and tsunami would not normally affect states so far apart, I wanted to show our Earth in a truly unpredictable, raging light, affecting multiple members of the Final Six and their families at the same time.

Aside from the above, the majority of The Final Six is steeped in true science. Even the most fantasy-like element of the book, the RRB, comes from a seedling of fact. I was first inspired to come up with the serum concept after reading about a 2014 study, where scientists bred new strains of bacteria. Months later, while I had the honor of meeting with the brilliant NASA Europa scientist Robert Pappalardo, I shared my RRB idea with him—and he then told me about the Deinococcus radiodurans…a radiation-resistant phylum of bacteria! While very different from the RRB in my story, knowing that something along those lines actually exists gave me the confidence to run full steam ahead with this plot point.

In a number of ways, researching and writing The Final Six gave me a whole new education. I’m so excited to share this world, the characters, and the science of it all with you, my readers. For any further questions you may have, find me online!

Don’t forget to check out my amazing Pre-Order Offer for THE FINAL SIX (Ends 3/6)!