A Mentor Is a Girl’s Best Friend

A Mentor Is a Girl’s Best Friend

A couple months ago, I had the surreal experience of walking into a Manhattan Barnes & Noble and finding my second novel, Timekeeper, on the Teen New Releases shelf along with Kirsten Smith’s second book, Trinkets. Seeing your book on the shelf is a pinch-me moment no matter how you slice it, but sharing that experience with one of your closest friends — and the person who inspired you to write — makes it all the more magical. It also reminded me how important a mentor can be in pointing you towards success, especially when you’re a young ‘un just starting out.

As a teenager dreaming of a writing career, I was inspired to discover that two of my all-time favorite movies, Legally Blonde and 10 Things I Hate About You, were both written by a female team: Kirsten and her writing partner, Karen McCullah. I had no clue if they’d take an unpublished, unproduced kid writer like me seriously, but I wanted to meet them badly enough that I gathered my courage and wrote Kirsten a fangirl email — also letting her know that I had a romantic comedy idea I wanted to pitch her and Karen, and would they be willing to meet with me? It was a lofty request coming from a teen upstart to a pair of Hollywood powerhouses, and I know the majority in their position wouldn’t have bothered replying. But instead, twelve days after I sent the email, I received a warm reply from Kirsten — who from that point on became known to me as “Kiwi.” Her email included this line, which was so thrilling that it resulted in me jumping up from my computer chair and doing a little maniacal happy dance in my bedroom. “Karen and I would be honored to meet you and to hear more about everything you’re working on.”

I mean, what a gift! As I wrote in my reply, “Omg!! I just about screamed and had a heart attack when I read your email!” We met for dinner the following week at the now-defunct Alex Restaurant on Melrose, and after a three-hour meal filled with laughs, sisterly advice, and rom-com pitching, a friendship was born. Amazingly enough, Kiwi and Karen loved the idea I pitched them — and though we didn’t end up making the movie, that hardly mattered in the end. Their belief in my ideas at the earliest stage of my career is something I’ll never forget; it’s what made me believe that yes, I could really do this, I could be a legitimate writer too. And more importantly, our friendship is still going strong all these years later. In fact, Kiwi is the first person who ever suggested I write a YA novel. In a serendipitous twist, she gave me this advice while we were standing in the Teens section of Barnes & Noble, a place where several years later our books would sit together on the shelves.

I wish every budding young writer had a Kiwi in their life to help guide them on their way — so I figured the least I could do is share her wisdom! Recently, I asked Kiwi her secret to success.

“Watching a lot of movies, loving movies, reading a lot of scripts, and continuing to learn as much as possible,” Kiwi answered. “Whether it’s pitching ideas to people, reading books, or reading interviews from other writers, you never finish learning. I’m learning things all the time and always trying to improve.” Kiwi also emphasizes finding the joy in brainstorming, by coming up with ideas with your friends, looking at life as a possible series of stories, and just staying open to the possibility that something could be a movie or a book. 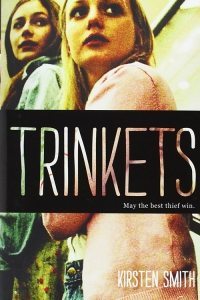 “Even if you don’t have the idea before you sit down to write, just start and conquer the blank page,” she recommends. “It’s always a battle to start writing, but you just have to push yourself to do it, because once you do, you always feel better when you’re writing than when you’re not writing.”

And this is something Kiwi knows well. With six star-studded studio movies, a YA novel-in-verse called The Geography of Girlhood, and her new release Trinkets under her belt, Kiwi is a constant reminder of all you can achieve when you just, as she puts it, sit down and conquer the blank page.

As I looked at our books hanging out together on the bookstore shelf, I once again thought how glad I was that I sent that email years ago. If you’re reading this and you too have an idol who you would love to be mentored by — reach out and ask! That might be all it takes to set you on the path to your dreams.

This article was originally published by The Huffington Post (now HuffPost): A Mentor is a Girl’s Best Friend.

This site uses Akismet to reduce spam. Learn how your comment data is processed.